About seven years ago as we sat together one night watching baseball on TV, one of us spoke up and said, “wouldn’t it be awesome to be one of these dudes who travels the country watching baseball and visiting every ballpark along the way?” We didn’t immediately quit our jobs, drop our lives, and hit the road, but by the end of that night we had decided to do the next best thing: slowly but surely visit all 30 Major League ballparks, together, no matter how long it took. And this blog became the diary of our great quest! 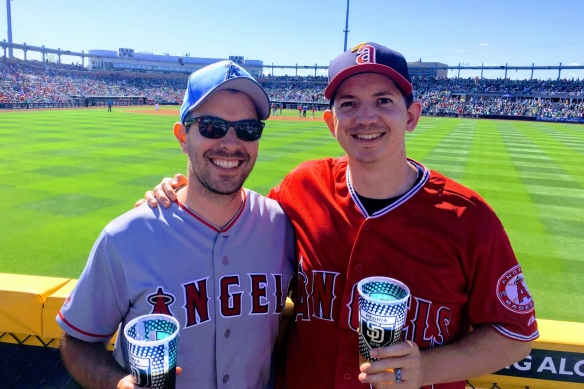 In the years since, quite a bit of life has happened for both of us–four kids between us, for starters–but two things have remained: our friendship, and our journey for 30! After a couple seasons of hitting a ballpark here and a ballpark there (mostly in our own state), we decided we were due for a lengthier trip in the 2018 baseball season. Our destination? The Midwest! And we leave in 36 hours.

The 2018 baseball season ends on Sunday, September 30, and for each of the last six days of it we’ll be catching a baseball game in one of three cities (Chicago, Milwaukee, Minneapolis) at one of four stadiums (Wrigley Field, Guaranteed Rate Field, Miller Park, Target Field). Check out the itinerary of this trip’s games here: The Midwest Swing, Volume 1!

The day after tomorrow we will board a flight to Chicago, hop a train to Milwaukee a few days after that, and catch a bus to Minneapolis the day after that. A true “planes, trains, and automobiles” kind of trip. In true Gregg and Brent fashion, we booked flights and AirBnB’s months ago and spent a couple hours last week finalizing game tickets, ballpark tours, and ground transportation…leaving just the right amount of “flying by the seat of our pants” once we hit the road. We’re even excited to see and catch up with some old friends who live in these great cities!

For those of you unfamiliar with our cute little blog here, after each day of the trip we’ll typically write and publish two blog posts: Brent writes the recap of the game and the ballpark (cuz he can’t help but write like a journalist) while Gregg writes a recap of the day’s adventures (cuz he’s funnier). If no one were to read a word of our posts, we’d be devastated because we are so hilarious and the universe would miss out, but we’d still do it just for us. Hope you enjoy the road trip with us!